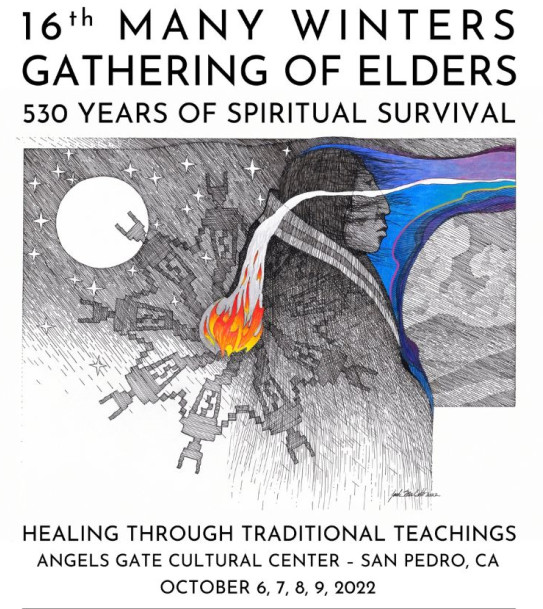 San Pedro, CA – The Many Winters Gathering of Elders (MWGOE) Organizing Committee is excited to announce its 16th MWGOE, scheduled for Thursday, October 6 through Sunday, October 9, from 11 am to 6 pm at Angels Gate Cultural Center (AGCC) in San Pedro, CA on Gabrielino-Tongva territory. The MWGOE is a four-day gathering where Native/Indigenous Elders and knowledge-keepers from across the country gather to share teachings through oral tradition with the community. The Gathering also hosts various Native ceremonies that take place throughout the four days. The event is free, family-friendly, open to the public, and held in partnership with AGCC.

Elders from local tribes including Gabrielino-Tongva, Acjachemen, Fernandeño Tataviam, Chumash, and other California tribes have attended in the past and will join in October. Tribal elders from other regions (Arizona, Nevada, New Mexico, Montana, South Dakota and others) are expected, as well. The Gathering takes place under an arbor which serves as the traditional place of teaching and learning – where Elders pass on knowledge to the younger generation, which is part of intergenerational healing from historical trauma.

The first MWGOE was held on October 12, 1992, in response to the false narrative represented by the quincentennial celebrations of Christopher Columbus’ “discovery of America.” Today, the Gathering continues to be an important occasion for the Native/Indigenous community, to reconnect to and practice ceremony, and to celebrate 530 years of spiritual survival. It also allows access for the general public to learn and acknowledge the traditional knowledge and values that have supported and sustained Native lifeways.