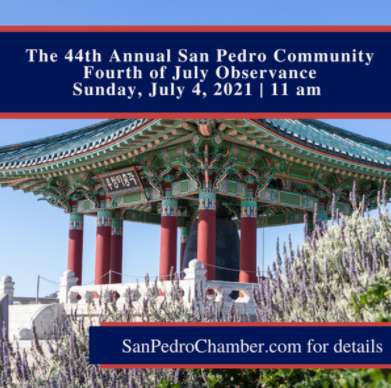 The Annual San Pedro 4th of July Community Observance will be held Sunday, July 4, 2021 at Angels Gate Park, home of the The Korean Bell, one of San Pedro’s most enduring landmarks, plays a key role in the ceremonial observance. The ceremony will begin at 11:00 AM and includes the posting of the colors and remarks by elected officials and members of the Korean community.

Angels Gate Park is located at 3601 South Gaffey Street in San Pedro. The free event, conducted every year since the Korean Bell’s installation in 1976 is sponsored by the Office of Councilman Joe Buscaino; the City of Los Angeles Department of Recreation and Parks; the San Pedro Chamber of Commerce; and the Korean Friendship Bell Preservation Committee (KFBPC).

For further information on this event, please contact the San Pedro Chamber of Commerce, at (310) 832 – 7272 or visit the Chamber’s website at www.SanPedroChamber.com.