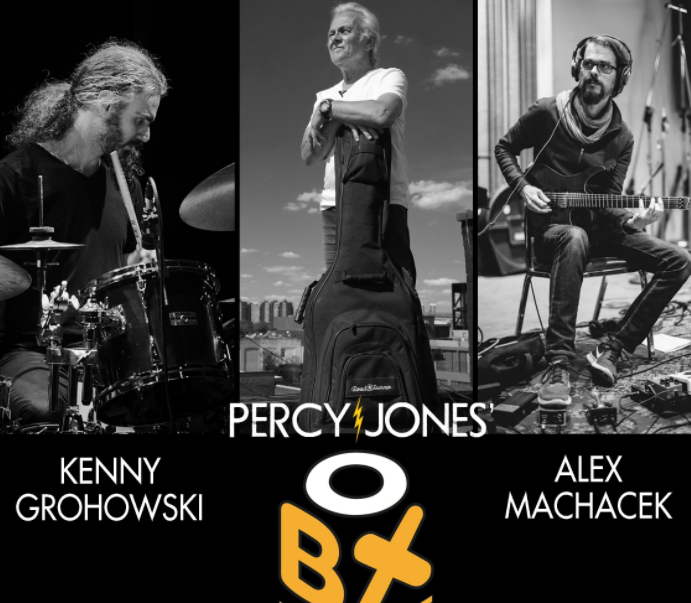 Icon PERCY JONES; the innovative guitar visionary ALEX MACHACEK and multi-genre drummer extraordinaire KENNY GROHOWSKI. The band will be rehearsing new material in Los Angeles followed by a short warm-up tour on the West Coast USA, in January 2021. Percy Jones and Kenny Grohowski played together for several years in the last incarnation of the legendary fusion band Brand X, while Alex Machacek has performed 3 shows with Jones and Grohowski as part of the Brand X. Debut studio album will be recorded sometimes during the 2022, accompanied by multiple tours in North America and around the world, and it will be released worldwide on MoonJune Records.

Legendary bassist and composer Percy Jones has launched a blazing new trio featuring guitarist Alex Machacek and drummer Kenny Grohowski. Jones is known as one of the driving forces behind the pioneering British fusion band Brand X during its existence between 1976-2020. He’s considered one of the most important electric bassists in history, with his iconic sweeping, mercurial, and harmonic-infused fretless approach.

Percy Jones is ready for his next chapter, which involves deploying brand new works that uniquely combine jazz-rock with expansive new ideas drawn from myriad genres and influences, including classical, funk, ambient, and avant-garde elements. To that end, he’s reruited two of the most celebrated, multitalented and versatile musicians imaginable to accompany him.

Alex Machacek has established himself as a first-call electric guitarist across the jazz and art-rock worlds. He’s recorded nine albums featuring his own electic, evocative music under his own name, as well as part of FAT (Fabulous Austrian Trio), and duos with multi-instrumentalist Gary Husband and drummer Marco Miinnemann. In addition, he’s performed with the likes of U.K., the Virgil Donati Band, and CAB with Bunny Brunel and Scott Kinsey. Machacek also served as Brand X’s tour guitarist on several occasions.

Kenny Grohowski is one of the most seeking and versatile drummers performing today. He’s worked with a who’s who of the modern jazz and avant worlds, including John Zorn, John Medeski, Imperial Triumphant, Trey Spruance and Secret Chiefs 3, Andy Milne and Dapp Theory, Felix Pastorius, and Lonnie Plaxico. From 2018-2020, Grohowski was also the other half of Brand X’s rhythm section, infusing the group’s classic material with fresh perspectives that helped recast it for a new century.