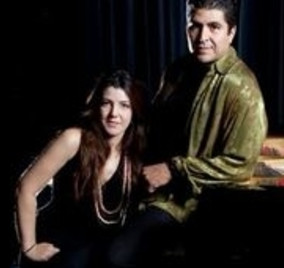 L.A.’s highly acclaimed arranger/producer Otmaro Ruiz and International Recording Artist, Catina De Luna will be presenting the music of their Grammy nominated CD Catina DeLuna and Lado B Brazilian Project. Featuring A+ LA Session Players, LADO B Brazilian Project breaks the notion of Brazilian repertoire beyond the Carnival and Festive Stereotypes. Focusing in some of the most elegant and moving compositions spanning from the early XX Century to the present, the band travels through true rare gems of Brazilian music history, as well as boldly arranged new renditions of iconic themes by the unique pianist and producer Otmaro Ruiz.

Catina and Otmaro joined forces in 2015 to release the album Catina DeLuna and Lado B Brazilian Project which has caught the attention of music critics and fans internationally and catapulted them to appear live in countless radio interviews and publications such as a feature in the current edition of Rolling Stone Magazine Brazil, The Absolute Sound Magazine, NPR Radio, TNT television and a spot on Planeta Brasil Television along with other outlets. The record has now received an official Grammy nomination for the 2016 Grammys in the category of Best Arrangement, Instruments and Vocals. Ruiz and DeLuna share their nomination in the 2016 Grammys in the same category as famed music icon, David Bowie.