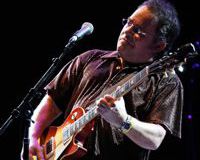 With his unique style of finger picking, and bluesy vocals, DAVE WIDOW combines elements of R&B, funk, soul and rock. Nominated for “Best Musical Group in 2012” by the LA Music Awards and recognized in 2013 by The Blues Foundation as one of the five finalists for Best Blues CD, Widow and his Line Up of session all-stars deliver a soulful helping of guitar-driven blues.

Widow’s musical style is influenced by his relationship with many great blues and R&B talents, including Buddy Miles, Bonnie Bramlett, Bill Champlin, Lonnie Mack, and his mentor and collaborator (the late) Roger “Jellyroll” Troy, bassist and vocalist for The Mike Bloomfield Band.

Bernie Pearl is one of the most highly respected blues musician in Los Angeles.

Since the 1960’s Pearl was the “go-to” sideman at the old Ash Grove in Hollywood. This master guitarist has played with the most influential blues players of the last 50 years and was recently nominated for “Best Acoustic Blues Album” for Blues Blast Magazine Awards. Here is a chance to see one of the great LA-based blues guitar players of our time.