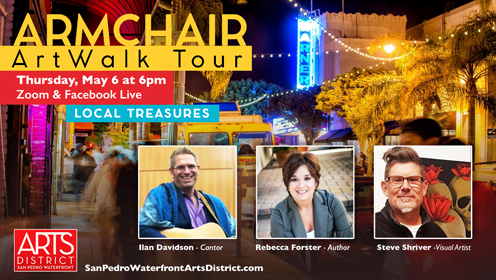 MAY ARMCHAIR ARTWALK TOUR
LOCAL TREASURES
FirstThursday, May 6th at 6:00pm on Zoom

The San Pedro Waterfront Arts District, in collaboration with the artists who have performed or exhibited their arts in San Pedro, announces the next Armchair ArtWalk Tour to be held on Zoom at 6:00pm on FirstThursday, May 6th, 2021 at 6:00pm
The public is invited to join us on Zoom, by registering for a free ticket and register for a one-hour virtual, interactive tour with some amazing artists. Register in advance for this meeting. After registering, you will receive a confirmation email containing information about joining the meeting.

We will also be live streaming from our Facebook page, where you can find videos of previous Armchair ArtWalk Tours and project progress videos.

This is a free service for our community – we miss you and look forward to seeing each other on-line. The May 6thFirstThursday Armchair ArtWalk will be talking with local artists about their work and exploring why we think they are Local Treasures. Join us to see:

Rebecca Forster – Rebecca wrote her first book on a crazy dare and found her passion. Now, with over forty novels to her name, she is both a USA Today and is an Amazon best-selling thriller author. The Josie Bates thrillers that make up The Witness Series are set in the South Bay and have had more than 3 million downloads. The books have been translated into German, French and Italian. Rebecca has taught at UCLA’s acclaimed Writers Program. She has been a featured speaker at writing conferences, bar associations, and is a multiple presenter at the L.A. Times Festival of books. She is a patient/family advisor at Torrance Memorial Hospital and lives in Palos Verdes. Rebecca is married to a superior court judge and is the mother of two sons.

Steve Shriver – Steve has made art that reflects his life for many years, starting in college in 1981. His job of decorative painting got him interested in the history of art and ornament, an interest that continues today. His decorative work can be found in many houses, hotels and casinos around the world. His personal art has centered around the world he lives in, though the accident that almost took his life 5 years ago made him look quite a bit at his mortality. His last show was at the SoLA gallery in 2019. He is currently working on a painting that he started in 1982.

Ilan Davidson – Cantor Ilan Davidson has served Temple Beth El since 1995, celebrating his Silver Anniversary in 2020. The youngest in a long familial line of cantors, he began his training at the age of five with his mentor, Hazzan Philip Model z”l. A Los Angeles native, he has a strong performing arts background from the University of California, and also is talented secular musician and contemporary Jewish singer and songwriter. He released his first album, Stained Glass, in 1995.

Cantor Davidson is a consummate artist and a devoted social activist. He has given concerts in Israel as well as throughout the United States. Performing sacred as well as secular music, from Bimah to Broadway. His irreverence, humor – who else would create a temple house band called The Moody Jews? He shows the community and the world how beautiful music warms hearts, stirs souls, and heals. In 2017 Cantor Davidson was appointed Vice President of the Los Angeles County Commission on Human Relations by Supervisor Janice Hahn and, is a past president of the South Coast Interfaith Council.