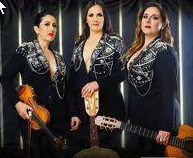 The first in the series of three is Ellas (formerly known as Trio Ellas). Still a trio, Suemy Gonzalez, Nelly Cortez and Melinda Salcido illuminate the stage with their contemporary mariachi sound. Their impeccable vocals, violin, guitar and guitarron fuse romantic ranchero with rock, pop and gypsy jazz.
Together and individually, the women of Ellas have earned Grammy nominations and performed around the world, from Japan to Mexico and from Disneyland to the 2008 Beijing Olympics.