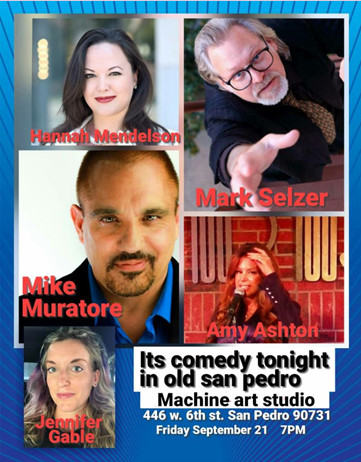 Join us for an evening of adult humor!

Hosted and Emcee’d by Mike Muratore:
Mike Muratore has earned the moniker of “The Serial Killer of Comedy” with his brand of raw, in-your-face, no holds barred comedy. His act has been honed in the worst venues possible for comedy over the past 20 years. Playing terrible venues has turned Mike into one of the best comedians performing today. Will you be offended? Yes. Will you be scared? Probably. Will you laugh? Definitely.

Mark Selzer:
If Salvador Dali painted a satire of a comic it would be Mark Selzer. Mark lives in Hollywood and has a weekly show there at Boardners Wednesday nights. He has performed at the Comedy Store, Flappers and the Haha Cafe and has headlined in Los Vegas, San Diego and Alaska. Currently performing at a divebar near you.

Jennifer Gable is a touring Headlining Comedian who performs in Clubs across the US with a huge online following. Her TV credits include Comedy Central’s ‘Drunk History’, ‘FunnyOrDie’, ‘One Min. Comic’ Netflix film w/ other Comics like Bill Burr, Nick Swardson, Ari Shaffir, Bobby Lee, and a HBO pilot by Dir. David Fincher that you will never see. She enjoys writing humorous jokes, observations and stories covering all genres. Her humor tends to be smart and honest. She’s performed w/ other top Comics like Nikki Glaser, Theo Von, & Aparna Nancherla on Shows. She also has had experience Directing the late Anton Yechin in a movie. Jennifer is currently creating a Web-Series/TV Show called ‘Pennies for Your Thoughts’ with other talented Comedians.

“Fluent in bulls…, in front of or behind the camera.”

Back By Popular Demand The One & Only
AMY ASHTON!

Amy started developing her act at The World famous Comedy Store after being chosen by owner, Mitzi Shore and made a “Paid Regular”. Since then along with her successful comedy career has become an Executive Producer of several TV Shows she created that aired on E!, Amy says, “She’s now turned into the man she always wanted to marry only with hair!” All that why doesn’t she write a book?
Oh yeah she did. Amy Ashton is a Published Author of, How To Score with a Girl By A Girl which is being developed into a Late Night Talk show!

Tickets are available at Brown Paper Ticket just click here. To purchase HARD tickets please call Bill at 310-831-2928 Tickets are $5 in advance or $10 at the door