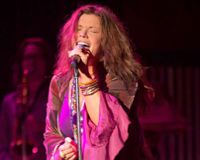 Nominated for a Tony Award in 2014 for her title role in the Broadway musical, “A Night With Janis Joplin,” Mary Bridget Davies pays tribute to The Queen of Psychedelic Soul.