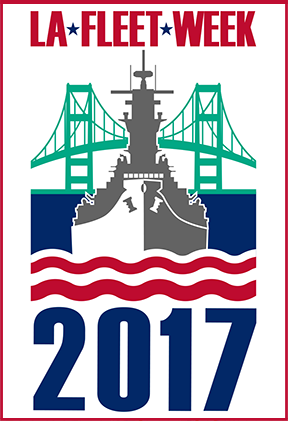 LA Fleet Week ship details include:
• USS ANCHORAGE (LPD-23) – a San Antonio-class amphibious transport dock and the second ship of the U.S. Navy to be a namesake of the city of Anchorage, Alaska.

Motto: “We Leave Nothing to Chance.”

• USS DEWEY (DDG-105) – an Arleigh Burke-class guided missile destroyer in the U.S. Navy. Dewey is the third Navy ship named after Admiral of the Navy George Dewey, hero of the Battle of Manila Bay during the Spanish-American War.

Motto: “The Will to Fight from the Heart”
• USS SCOUT (MCM-8) – the eighth ship in the Avenger-class of mine countermeasure ships, commissioned by the U.S. Navy on December 15, 1990.

Motto: “Pathfinders – We lead the way”

• USCGC ACTIVE (WMEC-618) – Coast Guard Cutter ACTIVE is the eighth Coast Guard vessel to bear its proud name. A Reliance-class cutter, she was officially commissioned by the U.S. Coast Guard on September 17, 1966.

• HMCS OTTAWA (FFH 341) – a Royal Canadian
Navy Halifax-class frigate, the Ottawa is named
for Canada’s national capital, the City of Ottawa, and is the twelfth and final ship of the Halifax class that were built as part of the Canadian Patrol Frigate Project.

• USS Pasadena (SSN-752) a Los Angeles-class submarine, was the third ship of the United States Navy to be named for Pasadena, California. Pasadena provides the Fleet Commander or Task Force Commander a multi-mission platform. Wikipedia