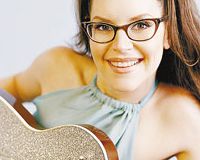 With a career that spans two decades, Grammy®-nominated pop icon Lisa Loeb, topped the charts in mid-1990s with a run of Billboard hits. Her “Stay (I Missed You)” from the film Reality Bites, reached #1 in 1994, a year later, “Do You Sleep,” was counted in the Top 20 and then in 1996, “I Do” reached #17.
Loeb has continued to record and tour, adding childrens music to her successful repetoire, as well as work in film, and TV. Her successful television projects included Dweezil & Lisa a 2004 Food Network series, filmed with her then-partner Dweezil Zappa, and a follow-up show called Number One Single.

Celebrate TARAN SCHINDLER’S 50th BIRTHDAY! Enjoy the show and have Cake & Pie* with the Grand Annex’s Artistic Director!
* Cake & Pie is the title of Lisa Loeb’s 2002 A&M record release. At this party, we’ll have the real desserts to share!