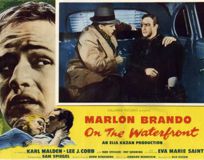 “I coulda been a contender.” The iconic line from ex-prize fighter-turned-dockworker Terry Malloy (Marlon Brando). Malloy struggles to stand up to his corrupt union bosses. Highly regarded by critics at its release and today, On the Waterfront has stood the test of time.

Join us for two water-themed films in San Pedro! Purchase tickets for the 2 p.m. screening of 20,000 Leagues Under the Sea