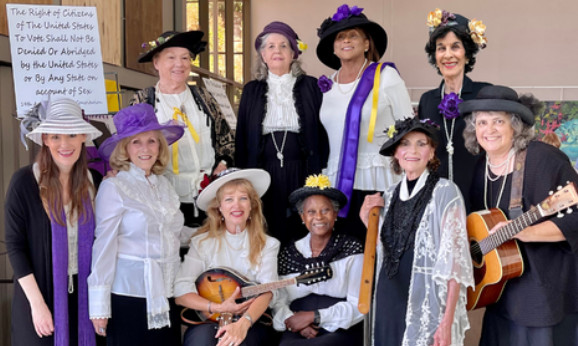 “THE SUFFRAGETTE MUSICAL: FROM BATTLES TO BALLOTS”
A CENTURY OF STRUGGLE FOR THE RIGHT TO VOTE

Co-produced by Grand Vision Foundation and the Pennyroyal Players.

The Pennyroyal Players pay musical tribute to the diverse “radical women” who dared to fight for their rights. The story begins in 1591 in England and ends in Tennessee in 1920 with the final ratification of the 19th Amendment to the US Constitution, which opened the doors for women to cast their vote in the United States. Presented with humor, this fast-paced musical is an account of the struggles, tragedies, and victories these heroic women faced every step of the way.

This production was created by Anne Destabelle. The show is 1 hour with no intermission and is suitable for all ages.