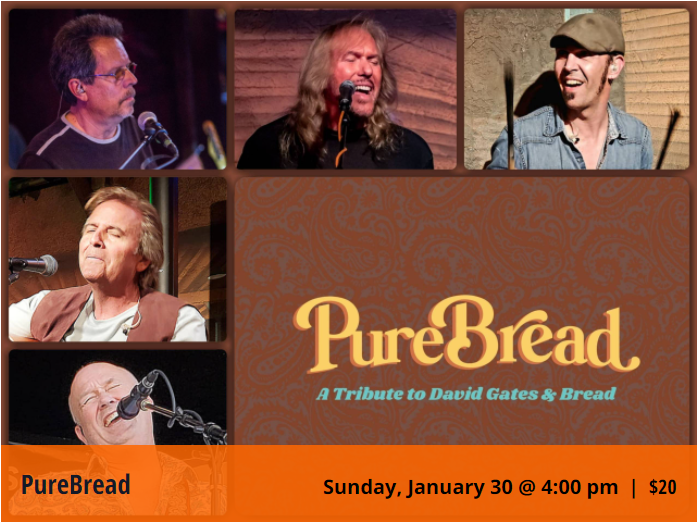 Alvas Showroom is very pleased to be able to introduce to you PureBread, Southern California’s first tribute to the Soft Rock supergroup of the 70’s, Bread!

Bread rose to popularity in 1970 with their first number one hit single “Make it With You” which was followed up with no less than 12 top 40 singles making them one of the most prolific commercial bands of our time.

Driven by his deep love and admiration for the music of Bread, and in particular David Gates, band leader Ray Koukal was lead to put together a band of stellar musicians to help him pay tribute to this group in early 2021 and they’ve been working very hard to present this music to you in a very heartfelt and respectful way.

When you hear PureBread’s immaculate rendering’s of song’s like It Don’t Matter to Me, Diary, Everything I Own, Lost Without Your Love, Baby I’m -a Wan’t You, The Guitar Man, Sweet Surrender, If, Aubrey and Make it With You among others, you will be reminded of just how impactful Bread was in the emergence of soft rock as well as the mark that they made on pop music in general.

So please make your plans to join us on Sunday, January 30th as we celebrate this great music and sing along to all of the timeless classics that have become staples of the current genre that has now become known as Yacht Rock!