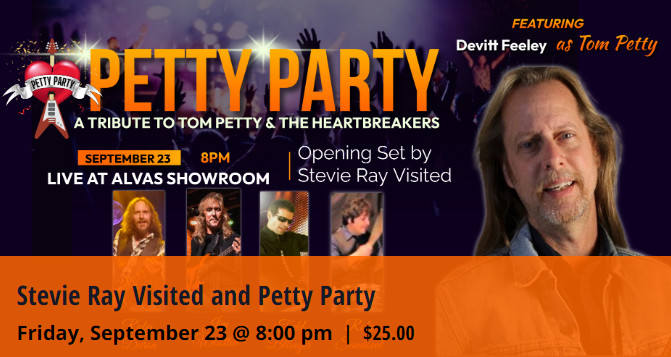 AN EVENING OF BLISTERING BLUES AND POWER POP ROCK AT ALVAS SHOWROOM!

We’re very excited to present this show to you featuring some of the south lands finest singers and musicians.

The evening starts out at with a set of Blues Classics from STEVIE RAY VISITED featuring guitar extraordinaire ROBY DURON.

Roby has completely captured the sound, look and feel of Stevie Ray Vaughn in such minute detail that you will think that you were catapulted back in time to when the legendary guitar slinger hit the airwaves with classics like Pride and Joy, Crossfire, Cold Shot and The House is Rocking.

The second part of the evening will feature a new band on the scene fronted by the supremely talented DEVITT FEELEY who you may have seen perform with Deja Vu, the popular SoCal tribute to CSN&Y. Devitt has assembled a stellar group of musicians to pay tribute to the one and only Tom Petty and the Heartbreakers.

Appropriately named PETTY PARTY, the band celebrates all of the legendary hits from Petty’s expansive catalogue including American Girl, Breakdown, Don’t Do Me Like That, Free Fallin’, I Won’t Back Down, Refugee, The Waiting, Learning to Fly, Running Down a Dream…..we promise, if you are even a casual fan of this music, you will know and want to sing along to every song!

So don’t sit at home and have a pity party, come out and join the Petty Party at the Coffee Gallery Backstage!
$25.00