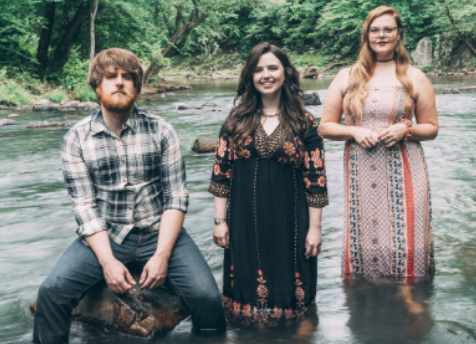 “With groups like The Barefoot Movement on the scene, the future of bluegrass is in safe hands.” — The Daily Country

The Barefoot Movement is doing a FREE SING-ALONG before the concert – learn and sing Carter Family classics and brand new Barefoot originals. Come between 6:45pm-7:15pm for the Sing-Along (or tap your toes and listen) with Noah, Katie and Tommy. During the sing-along, you can also enjoy one 2-for-1 special offer to sample our new featured craft beers from local breweries Smog City and HopSaint.

Acclaimed Americana group The Barefoot Movement carved out an indelible space in the acoustic scene since their 2011 debut album, Footwork. Their most recent release, 2021’s Pressing Onward, still finds them standing firmly on their 21st century bluegrass foundation. Noah Wall leads the band with her powerhouse vocals, songwriting, and fiddle. Mandolinist Tommy Norrison and upright bassist Katie Blomarz round out the sound with their top-tier musicianship. Their energetic and joyous sound earned them the 2014 IBMA Momentum Award for Band of the Year and has garnered them fans nationwide and beyond. Doors open for the show at 7:30pm.