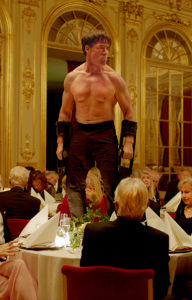 The Square is a 2017 Swedish satirical drama film directed by Ruben Östlund and starring Claes Bang, Elisabeth Moss, Dominic West, and Terry Notary. The film is about publicity surrounding an art installation, and was partly inspired by an installation Östlund and producer Kalle Boman had made. It was shot in Gothenburg, Stockholm and Berlin.

The film was entered into the 2017 Cannes Film Festival, where it received positive reviews and won the Palme d’Or. It was subsequently selected for the 2017 Toronto International Film Festival. It was selected as the Swedish entry for the Best Foreign Language Film at the 90th Academy Awards.