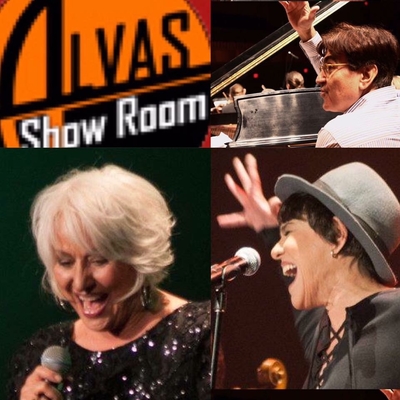 Cristina Rebull is a Cuban powerhouse singer, actor, award winning writer, professor of theatre in Miami, where she resides. When she interprets a French classic you’ll think she is channeling Edith Piaf. Her Tangos are like watching a short story, her big, rich, emotionally expressive voice ranges in colors according to the character she becomes. She sings Spanish, English, Portuguese, and occasionally in Guarani (Paraguay). You’ll get a sense of being in Broadway Show with an intimacy only Alvas offers.

Candi Sosa is a singer/songwriter who resides in Los Angeles and has been part of the local scene for decades. Cuban born, fluent in Spanish, English and also sings in Portuguese. She is known for her vocal range and versatility, she can go from a Celia Cruz style Rumba, a Barbara Streisand standard to a Janis Joplin blues, a romantic Bolero, an American Jazz Standard, to a Shirley Bassey big Ballad.

World class musicians round up this unique musical experience that is “C&C”.