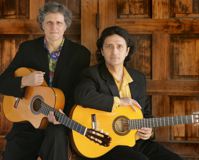 Guitar duo and Grammy Award nominated Strunz & Farah have been performing together since 1979. Their original rhythmic and virtuosic sound combines Latin American and Middle Eastern music, which has been described as flamenco-style world fusion. Respectively from Costa Rica and Iran, they met in LA where they pioneered a musical genre with their culturally rich repertoire.